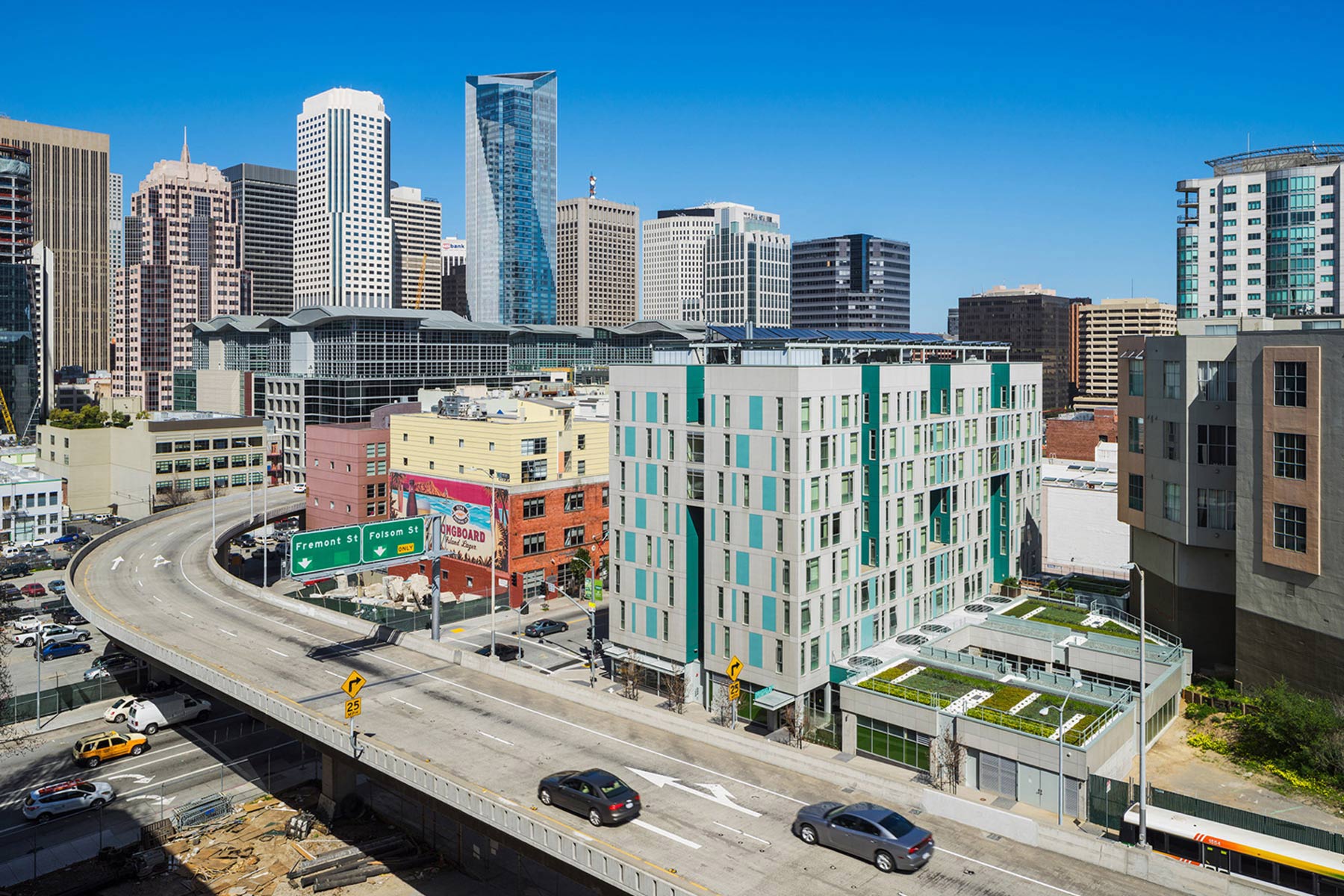 Q: What led you to focus on designing supportive housing for the homeless?

When I was in the architecture program at the University of Virginia, I got involved in a volunteer organization, Charlottesville Housing Improvement Project. I started leading crews, repairing houses for low-income families in the area—it might be a screen door, or a roof, or a window installation. That meant a lot to me. Then I spent a year as a fellow at the Congressional Hunger Center, working on domestic food insecurity. Realizing that I was really passionate about design and social equity, and that policy moves too slowly for me, I started focusing on affordable housing, eventually getting my master of architecture degree at U.C. Berkeley, working for a few small and midsized firms, and then coming to LMSA. Although there are a lot of firms that do some mission-driven work, I don’t know of another entirely mission-driven firm.

Q: How would you describe your philosophy of practice?

After all these years, it means actively listening to the people we work with and for. I love when, at the beginning a project, we get to hear from developers and future user what their hopes and visions are. Then we bring to life a design that gives structure to their visions and needs and desires, while also tackling issues of durability, sustainability and affordability.

Q: How do you gather input from the homeless?

For the Block 9 project, we helped conduct a post-occupancy survey on Rene Cazenave Apartments, a similar project that opened in 2013 and that we’d designed for the same clients, Community Housing Partnership and BRIDGE Housing. We wanted to balance quieter and louder voices, so we did everything from conducting written surveys to holding in-person meetings with snacks. At the meetings paddles were handed out with “yes” on one side and “no” on the other, to make sure the super-chatters and the super-quiet people each had an equal voice in answering questions. And we had roundtables with members of the Department of Health and Human Services and with Community Housing Partnership to find out the defining characteristics of the people they would be selecting to live in Block 9. That led us to design beyond code with many universal design elements so residents of all abilities could thrive there and age in place.

With the Berkeley Way project, we asked the Berkeley Food and Housing Project, to let us interview residents of their other buildings. These residents told us how important it was to give them extra outlets with USB plugs so they could all charge their phones at once, for instance. What was really surprising was that when we interviewed the veterans—because the building will include 12 transitional housing beds for homeless male veterans—they told us that they didn’t want to lock their belongings up, even though they would be living with a roommate who they hadn’t chosen. They said security wasn’t an issue for them—rather than each having their own lockable closets, they’d rather have more space by sharing a bigger closet.

Q: Are there stories you can tell me about what your buildings have meant for the residents?

The one that comes to mind immediately is a man who lived at the Rene Cazenave Apartments. The San Francisco Chronicle interviewed him a few years ago—an artist who said that when he was unsheltered, he was unable to do his art. Becoming sheltered gave him the stability to reinvigorate his art practice, and he is now quite prolific. He finally had a place to store his paints and his wood. That was a beautiful thing that led to other positive developments in his life.

Q: Neighbors are often concerned at the prospect of housing for low-income people coming to their neighborhood. There’s a fear of the unknown. How do you deal with that?

The Berkeley Way project was approved under state law SB35, which streamlined the development process and meant that we didn’t have to go through a public process. But we held public meetings with neighbors anyway. After one public presentation, although some people were still concerned about having this project in their district and thought other districts should take it on instead, they did tell us, “This is a beautifully designed building, and it will be nice to have in the neighborhood.” That’s one of the important things about design, it can help pave the way for acceptance by the community. You want a building to serve the people who will live in it, and you want it to serve the neighborhood. And if it does both, you’ve won.